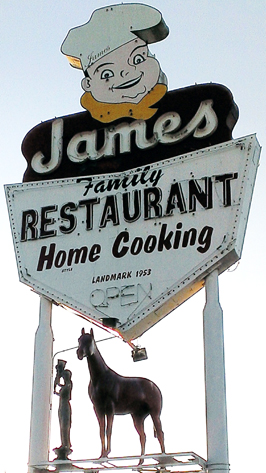 My friend Ari, David (my husband), and I drove out to San Fernando and had dinner at James Restaurant.

By far the best sign yet. And underneath the sign, for no reason I can fathom, are two statues: a horse, and a lady holding what looks like a horn of plenty. There seemed to be a space for a third statue, but really, aren’t those two enough?

-the walls inside are rose stone with brown tiles making star patterns, to extremely pleasing effect. Reddish-wood tables, hanging Tiffany lamps, striped curtains,  paintings on the walls. Our U-shaped booth had a painting on either side, one of seaside scene in what we think was Greece, and one of a deer at a stream near a house. Not necessarily great art, but very nice to look at.

-as we sat down I was exclaiming over how much I loved the place, and the woman finishing her meal across from us said, “you’ve never been here before? It’s very nice, right?” I assumed she was a customer but later realized she was the hostess-or possibly the owner-on break. She heard me saying something about taking notes for my blog and I think she thought I was a reviewer. Which I guess I kind of am in a way? But not the kind she thought, I think.

-I got the steak sandwich, my diner go-to, medium rare. It came with outrageously delicious garlic bread. I asked for fruit instead of fries, and the waitress explained they didn’t have fresh fruit just canned peaches or pineapple. Luckily canned pineapple is practically my favorite food in the world.

-Our U-shaped booth had walls on either side, and so was fairly secluded from the rest of the place; I think a lot of the tables are set up like that. It was kind of nice, like our own private space. There were TVs in the room that both David (my husband) and Ari, sitting at either side of the booth, could see but I, sitting at the curve, could only hear. So a good portion of the meal was them getting distracted by the Bachelorette while I said “what? What’s happening? What?”

-there seems to be some disagreement over whether James should have an apostrophe over the S. On the big sign it does not, on the menu it has both versions, and sign next to the door it does, on the sign on the building facing the road there’s a star that may or may not be meant to be an apostrophe.

-We all ordered water to drink and David (my husband) forgot to say he didn’t want ice, but the waitress paused before leaving and said, “oh, did you not want ice?” It was uncanny! I don’t think she is psychic or anything, I just think she is a very, very good waitress who can spot a man who doesn’t like ice. Also the glasses of water were gigantic, which was great because I always stress about running out of water. 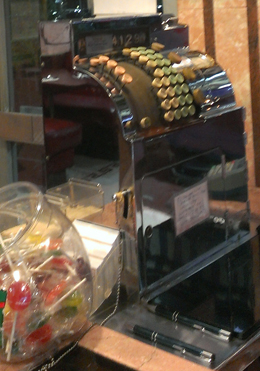 -on the menu were category headings like “pasta” and “chicken” and “seafood.” Next to seafood it said, in quotes, “good for you!” There was no commentary next to any of the other headings.

-there were two restrooms, as is standard, but one was marked “women’s” and the other was unisex. Inside that one, as Ari made sure I was aware, there was a sign on the door that said “lock for women’s use only.” I mean, I kind of get it, since there is a urinal plus a stall, so if it’s only men in there they can double up. But if it’s a unisex bathroom and a guy’s in there using the urinal and he didn’t lock the door because of the sign, that means I or some other woman could walk in on him at the urinal. That’s a thing I really never want to have happen, ever.

-next to the cash register was a bin of lollipops, the type they give little kids at the bank. I might not have even noticed the cash register itself but the hostess (owner?) pointed it out to me; it was possibly the same one they used in the ’50s, the kind with the round buttons on pegs. I was so glad she showed me; I’m crazy about that sort of thing.

What I Ate: Steak, garlic bread, canned pineapple, a bite of David (my husband)’s mashed potatoes

Who I Ate With/Things We Talked About: Ari and David (my husband); Dungeons and Dragons; how SF/F convention names are often really stupid; why we don’t believe in ghosts; reality shows

What Sort of Ghost I’d Expect to Find if I Believed in Ghosts Which I do Not: A teenage girl from a loud family, who would come here for a quiet place to read. Eventually she started noticing a boy who frequently sat a nearby table, also reading, and finally the waitress got fed up with them not getting around to it and sat them at the same table. James Restaurant catered their wedding reception. Note: Unless otherwise stated, all ghosts mentioned in this blog died peacefully of old age and then reverted to the age/place of their choosing.

Over the kitchen was a metal garland, a glass parrot, some tiffany lamps, and a statue of a cheeseburger. I just, I just loved this place so much.