Hoping to escape the horrible heat, I headed towards the beach and ended up at The Shack. It didn’t have air conditioning, but lots of fans and open windows and the ocean breeze made it much cooler than Burbank.

-Just inside is a counter where one can order food, a colorful menu hanging overhead and lots of flyers for sports night specials and stickers for skateboarding gear. To one side of the counter is a glassed in patio with blue stools, on the other is the room with the bar. Lots of ceiling fans, walls of slanted dark wood, blue booths and red tables and light wood chairs, a bar made of corrugated metal with tall tan wood bar stools. Lots and lots and lots of beer signs and surf boards and flyers on the walls, and multiple TVs showing multiple sports games. I sat at a table next to the bar, so I could watch the people at the bar and the people coming and going at the counter. It has a sort of fun atmosphere, like it is a place people come because they are in a good mood and want to be around people who are also in a good mood.

-The food on the menu seems to be the sort of thing one finds at any hamburger stand type place. I got the patty melt, and onion rings because the waitress told me they were good. They were, but the food came in a sort of basket with the patty melt sitting on top of the onion rings, so there was nowhere easy to put ketchup. Pouring them on top of the onion rings just seems like a good way to get messy fingers, unless you eat them with a fork, and who would do that? The patty melt had hot Beaver mustard, which was terrific.

-There was a soda fountain right by the door. As I was waiting to order, a man walked in from the outside and filled his empty water bottle with pink lemonade and walked back out. He wasn’t the tiniest bit stealthy about it but also no one saw him, so I have no idea if he was allowed or not.

-There were several tables in the room with the bar, but only one besides mine was taken, by two sort of preppy/beachy guys. As I sat down one was showing the other a picture on his phone, and saying, “Look at this photo for a minute before you say anything. Just keep looking. Think about all the things you’re going to say before you say anything.” After a long pause the other guy said, “…wow.”

-There were maybe five or six people at the bar. Closest to me were two men and a quite drunk woman. She had a loud voice, and was very much enjoying talking to the men, who didn’t seem to mind at all. One thing I heard her say was “I don’t think you realize that your tag is hanging out! Just cut it off! You know how to wash your clothes!” and then a bit later, “see this dress, a dress like this, there has to be a lining to it, because you can’t wear a bra, so there needs to be like a lining for your nipples.” Then, “I’m Pam, by the way. What’s your name?” One of the men seemed to really like her. It was the middle of the afternoon, but in answer to some question he assured her he had “no place to be until 10:22 p.m.”

-On the wall near the bathrooms is a frame with pictures of a boy who I guess passed away, and under his name are dates but it says “Born Oct 29, 1982- Reborn June 10, 2000.” I don’t think I’ve ever seen that before. Maybe it’s a Buddhist thing?

-Pam (the drunk lady at the bar) answered a trivia question–there must have been a screen with trivia questions I couldn’t see–with “Ellen Degeneres” and then said, “if you have any trivia questions, I’m your gal.” She was appalled to hear one of the guys had never been to Disneyland, and told him, “I’ve been going since I was a kid. Back then it was ancient.”

-The preppy/beachy guys behind me were arguing about who’s room was hotter. One kept saying, “My fucking Indian fucking sweatlodge.”

-On one wall is a banner with The Shack’s logo, and the phrase “Dude food without peer.” It seems to be their slogan or something? I have no idea what it means. There’s also a surf board hanging from the ceiling covered in flowers and a Budweiser ad, which I guess means it’s just a sign Budweiser made, so it was probably never used to surf on, which seems kind of sad to me for some reason. It looks like a perfectly usable surf board. Maybe I’m wrong and people have surfed on it lots of times.

-Someone seemed to be crank calling the bar. The bartender would answer, then yell at whoever it was and hang up, and then answer next time it rang. I thought caller ID was going to get rid of that kind of thing.

-Loud drunk Pam left. It seemed like she was just going for a moment, but she never came back.

-A young couple at the bar asked the bartender if she would help them settle a bet, and then asked her what she thought the scariest animal was. The whole bar got in on the conversation. “All a shark wants to do is eat! It has no brain, it doesn’t know better. It’s not cunning. It just eats.” and “I have no respect for hyenas! They start the trouble! I mean, get your own fucking food!” Someone mentioned hippos, and for a moment everyone nodded and that seemed to have settled the issue, but then someone else slapped the bar. “If scorpions could swim, we wouldn’t be having this conversation!” and it was back on again. “Spiders are worse than scorpions! You’ve heard the statistic that you swallow thirty spiders in your life? How many scorpions do you eat?” “Well, that depends on where you live.” The conversation finally changed tone when the bartender said she wasn’t really scared of any animals, she was scared of earthquakes. If one happened, she claimed, she’d panic and run outside right away, and then the customers got very interested in figuring out how many free beers they would have time to grab before she ran back in. None, she said. Many, they insisted.

-High on one wall there is a black mannequin torso, it looked like it was made out of iron or maybe black marble but also seems likely it was painted plastic, with a pipe running out of it into the wall underneath. I couldn’t figure out what it could be for.

-One of the preppy/beachy guys got up to get more drinks, and when he was just past my table his friend called, “you know your back is all sweaty, it’s totally gross!” I laughed and he added, “she thinks it’s gross too!” The guy with the sweaty back looked down at me and smiled and said, “you’ll have to excuse him. He’s my “special needs” friend I take out occasionally for a treat.” It was all very funny and friendly and nice, like we were in the same room so of course that meant we were all friends.

-On the wall near the counter is a laminated newspaper article with the headline, “Playa Del Rey Milkman Still Delivers After 42 Years.” Near it was a sign that said “Kailaiu, Oahu, 2758 miles –> Eat Here” and a small wooden sign with “No Smoking at this Counter” engraved on it.

-On the counter is an extremely old long round metal cage with a handle; it’s a tip jar now but I’m pretty sure it started out as a bingo spinner.

-According to one flyer, on Saturday nights they have live music from 11 p.m. on. I do not generally enjoy live music in bars, but I bet for people who like that sort of thing it’s fantastic.

What I Read While I Ate: “The Dog Master” by Bruce Cameron; I’d finished reading it a few weeks before but kept thinking about it, and wanted to reread some parts. It’s that sort of book.

What Sort of Ghost I’d Expect to Find if I Believed in Ghosts Which I do Not:  Three surfer guys with white stuff on their noses, who refuse to leave their surf boards outside. 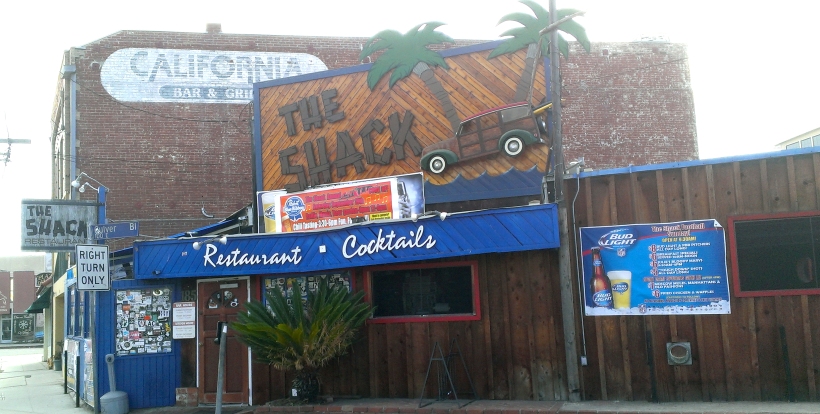