David (my husband) and I were on our way to a friend’s party in Burbank when he happened to check the calendar and notice that the party wasn’t till next week. We were all dressed up and hungry, so we decided to have dinner at the Smoke House. I love the Smoke House; it’s got this old-Hollywood feel to it (and the website says that “local luminaries such as Bob Hope and Bing Crosby” ate there) but I hadn’t been there since a couple of years ago when my friend Jenelle and I were leaving and saw two large men get into a fight by the valet station, and we END_OF_DOCUMENT_TOKEN_TO_BE_REPLACED

When the news came that Tom Bergin’s was shutting down  (or maybe staying open but not serving food anymore? Or maybe shutting down but not quite yet? It was all very unclear) I was horribly sad. I hadn’t been in years but I’ve loved it every time I’ve gone, and I know a lot of people who call it their favorite bar. I called my friend Suzy —who has spoken fondly of the place — and asked if she’d liked to pay last respects, and we headed over one Wednesday night after work.

-From the outside, it looks like an Irish tavern, with brick on some parts and white walls and heavy wood beams on others and a dark green sloping roof, and stained-glass windows. One enters through a door off the parking lot and finds themselves in a sort of an entry way… really it’s just an in-between space —to the right is the Horseshoe Bar (actually more of an oval) and to the left is the restaurant part, just a long room with booths for eating, and beyond that the back room with a red-felt pool table and huge fireplace, and more tables. Every inch of the ceiling, throughout the bar and front room of the restaurant, is covered in paper shamrocks with people’s names written on them. It’s a cacophony of shamrocks —I know cacophony usually refers to noise but you’ll have to trust me. Thousands of END_OF_DOCUMENT_TOKEN_TO_BE_REPLACED 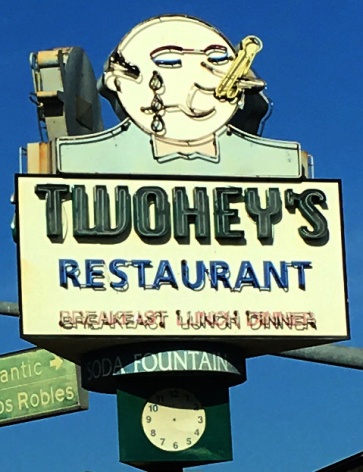 When I learned that Twohey’s was closing at the end of January, I decided to go there for lunch while I still had the chance. Twohey’s is right near where I lived in South Pasadena years and years ago, but I never went —never even knew it existed. As soon as I saw it I started kicking myself; it is the sort of old coffee shop/diner I most love. I would have been there every day, if I’d just paid a little more attention to what was around.

-Big and roomy, walls and ceilings done in turquoise and orange, with a large waiting area in the front, a counter with stools beyond that, and booths and tables in the room to the left. Hanging lamps, some red and cylindrical and others white and angular, hanging from an arching ceiling with lots of curves and slopes. The exact coffee shop I imagine when someone mentions a coffee shop. It was late December when I went, so there were Xmas decorations everywhere, including an enormous nutcracker soldier guy by the door, and several more nutcrackers in the window between the kitchen and the serving area. I’ve always liked nutcrackers. They look so silly and yet so earnest. END_OF_DOCUMENT_TOKEN_TO_BE_REPLACED 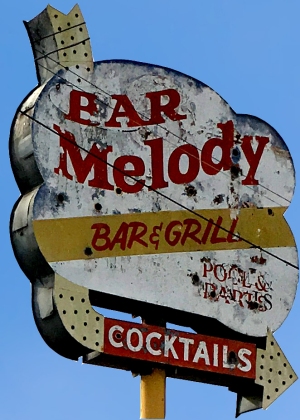 I was picking up friends at the airport and got there early so I could have lunch at the Melody Bar & Grill. In the evenings they have live music and I thought that if I visited then, with the noise and the dim lights and the crowds, it would be a lot harder to take notes and pictures. So I went just before noon, right after they opened, and it was nice and quiet and nearly empty.

-The main room has a long bar in the center, light-colored wood surrounded with tall chairs, tall dark tables along the walls with the same tall chairs, wonderful red wallpaper on the walls that weren’t rough stone, a fire pit with a lovely fire roaring away, pictures of END_OF_DOCUMENT_TOKEN_TO_BE_REPLACED

I needed to get lunch before going babysitting, and it was noon on a Sunday in Hollywood, and I wanted a bagel, so I went to Canter’s Deli. Canter’s first location was in Boyle Heights (in downtown LA) in 1931; it opened in this location on Fairfax (in Hollywood) in 1953. Often this blog takes me to new and wonderful places, but sometimes it’s about re-visiting places I’ve been a million times. I lived down the street from Canter’s Deli when I first moved to L.A. I was living in a tiny apartment with a couple other punk rockers, and we had almost no money and went to clubs every night, and if we happened to not be completely broke we’d go to Canter’s afterwards, because it was open all night and they were nice to us and you could get really full for super cheap, if you like eating pickles. We were very hungry so we liked eating pickles. I’ve gone to Canter’s fairly regularly since. I saw Liza Minnelli there  once (I was certain it was her and my friend was certain it was not… and then the waiter came over and quietly freaked out because OMG it’s LIZA!!) and I’m pretty sure the last dinner I had with my dear friend Marcia Wallace was at Canter’s. David (my husband) has been going to Canter’s all his life; with his grandfather when END_OF_DOCUMENT_TOKEN_TO_BE_REPLACED

I headed down to the Harbor House Cafe because I’ve been worrying about how many restaurants on the list are south of L.A., where I don’t go very often these days. I used to; I lived in Orange County for years, but now that I’m in the valley I almost never get that way anymore. So when I found myself already fairly far south for a doctor’s appointment that didn’t take as long as I’d expected, and with a particularly good audio book to listen to, I decided to drive down to Sunset Beach. I used to eat at the Harbor House Cafe all the time, when I lived in Huntington Beach and worked at Quicksilver Software, because it was open all night and I kept odd hours back then. I’m not sure I’d ever seen it during the day before. I was less than halfway there when there was an accident or something and traffic on the freeway, all but stopped. So I got off at a random exit and told my GPS to take me on surface streets. It was delightful. Didn’t take much longer and I got to drive past all END_OF_DOCUMENT_TOKEN_TO_BE_REPLACED 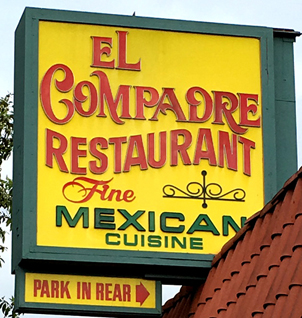 David (my husband) and I went to El Compadre with our friends Vanessa and French, and their daughter Helene who is almost three, and who I’ve been babysitting since she was a tiny baby, and who is awesome.

-Lots of xmas lights, some shaped like peppers, dim lighting from large round red and yellow hanging lamps, tables with red tablecloths, lots of dark wood, maroon booths with brass tacks, some of them rectangular and some round and cozy, oil paintings of street scenes and flowers, tall vases of lilies, a bar with  END_OF_DOCUMENT_TOKEN_TO_BE_REPLACED

with my friends Corey and Michael, and Michael’s two-year-old son Rocco. We were going to go to My Brother’s Barbecue, but it had closed down. Several places on my list have shut down in the year since I started the blog. It is a bit disheartening. But anyway, Dr. Hogly Wogly’s Tyler Texas BBQ turned out to be a great choice for the four of us.

-A few rows of brown and beige booths, with a small room off to the side with another row of booths. Grey carpet and wood walls, some paintings of END_OF_DOCUMENT_TOKEN_TO_BE_REPLACED

One year ago today, I blogged my first restaurant. I’ve now posted about 55 restaurants (and have three more in the hopper!). Doing this blog has made me so happy, has led to so many adventures and places I never would have gone.
Thought I’d list some of my favorites so far, in no particular order: 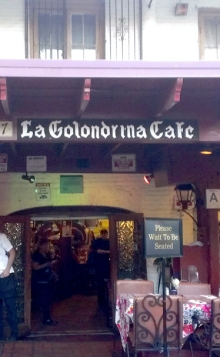 (1928) La Golondrina Mexican Cafe, downtown L.A.
A beautiful old Mexican restaurant on Olvera St. La Golandrina has been there since 1928, but the building was built in the 1850s.  Amazing stone fireplace and colored hanging lamps and artwork everywhere.

(1953) James Restaurant, San Fernando
A perfectly cozy coffee shop way out in the suburbs, full of nice people and comfort food. Hard to put my finger on why it’s one of my favorite places ever, except that I love coffee shops and this has everything I love in a coffee shop.

(1952) Tony’s on the Pier, aka “Old Tony’s,” Redondo Beach
The best bar I’ve ever been in, stuck on top of the restaurant like an octagonal hat, with windows on all sides looking out over the ocean. Back in the ’50s, a monkey escaped from the circus and lived at Tony’s, stealing sugar cubes from the tables.

(1946) Nick’s Coffee Shop, Los Angeles
Perfectly wonderful greasy spoon diner, cramped and marvelous. It makes me want to be a private eye just so I could sit at the counter and growl for coffee in between solving crimes.

(1908) Cole’s, downtown L.A.
and
(1908) Philipe the Original, downtown L.A.
These places are connected in everyone’s minds because they both claim to have invented the french dip, and I love them both so much I don’t want to play favorites. In fact they are so different it’s impossible to compare; Cole’s is a sit-down place that let’s you dip your own sandwich and Mickey Cohen used to eat there, while Philipe’s has a busy counter where the sandwiches come pre-dipped, with sawdust on the floor and a line of old wooden phone booths. They both say wonderful things about what life was like in L.A. in the early 20th century, and it thrills me that they’re both still open for business.

My friend Ari and I drove out to El Monte to visit the Jolly Jug. It ended up being a longer drive than expected, because of traffic, but it was ok because I taught him the car game “Botticelli” and that makes any road trip delightful. The sign over the Jolly Jug is one of my favorites. It took us a while, staring at it, to notice that the man’s head has a stopper at the top, like you might see on a jug. Nothing else about his head looks like a jug. It’s confusing.

-Light brown booths with beige wood panelling on some walls and exposed brick on others, hanging Tiffany-style lamps and lots and lots of decorations. Knick-knacks everywhere, a big display window when you first come in full of turtle figurines plus, for some reason, a couple of cows, a tall thin aquarium with koi, many many beer signs all over the walls. It’s wonderful; it feels kind of like being inside a cozy curio cabinet, or a dollhouse owned by a lady whose only hobbies are her dollhouse, and beer. Every where I look I see END_OF_DOCUMENT_TOKEN_TO_BE_REPLACED