“Crystal chandeliers,” is not, it turns out, a selling point of restaurant. There’s a chandelier shop that shares the parking lot.

Sunday brunch with my friend JT. We chose Foxy’s because it’s near her house and was very obviously a place that would have great breakfast food.

I was a bit surprised, maybe confused, by Foxy’s. That might have been partly because it was crowded to the point of chaotic so I had a hard time getting a handle on it. But I expected it to be a straight-forward diner, and it seemed very determined to show that it was not that. Lots of “we’re mature now” vases of chic flowers and red cloth draped over the entrances to the kitchens and many, many tasteful art prints of wine bottles on the walls. Also a wine-bottle shaped wine rack. This is a place that wants you to know it’s old enough to drink.

-long A-frame structure with a sharply peaked ceiling and awesome triangle-shaped stone fireplaces at either end of the long room. Hanging lamps shaped like lilies. A counter in the middle, many tables on either side. It’s really one long room, but the division of the counter makes it feel like three.

-I had a hard time ordering, mainly because I wanted the fruit bowl with a side of bacon and a side of toast, and there were no sides listed in the menu. So I had to figure out a back-up order if ordering sides was not a thing (I’ve been hurt before, okay?). Anyway it was fine, sides are a thing. The menu reminded me of the decor–there were the standard diner items, grilled cheese sandwiches and whatnot, but there were also things like the grilled ahi salad. Which is probably delicious, it just doesn’t seem to quite fit. JT got the cinnamon roll french toast (which is a thing that exists, and makes me for the thousandth time this week wish I could eat eggs and sugar ) and hot chocolate with whipped cream. I used to drink a lot of hot chocolate. I got decaf, which was great and plentiful, so that was nice. And they put some french bread on our table that was just fantastic.

-There was a truly gigantic bowl of creamer on the table but no sweeteners. I asked the waitress for Splenda, I specifically said Splenda, and she grabbed me a thing of sweeteners that had exactly one Splenda amongst the sugar and sweet-n-low (actually: “sweet life”). I just had the sweet-n-low (sorry: “sweet life”) and it really wasn’t a problem at all, I don’t know why I’m mentioning it.

-My bowl of fruit was delicious, and really just enormous, but when I’d eaten all the fruit I found what seemed to be a mixed green salad underneath. I don’t mean a big leaf of ice berg lettuce, but several different kinds of lettuces and what I thought at first was onions but JT pointed out was cabbage. I’m not entirely certain there wasn’t dressing on it. I’ve never seen such a thing before.

-Two young boys ran by us at one point, one wearing an Iron Man mask and the other a Spiderman mask. Both masks were pushed on top of their heads like hats and really, I don’t know why hats like that don’t exist. I would buy seven. I mean, I know there are superhero hats but I want a hat that specifically looks like I was wearing a mask and pushed it up onto my head.

-I don’t know if our table was smaller than it looked or if I caused trouble by ordering sides, but there was absolutely no room for anything. The creamer bowl was the size of a soup bowl and there was the jelly for the toast and also they brought us a plate of bread and butter and I’m still astonished nothing fell onto the floor. There were only two of us, and it was a four-person table, and there was not a single inch of space by the end of the meal.

-By the door was an antique phone and an old square milk can and a box for Rooster brand flour. I wanted to be all snooty about how they were way older than the restaurant and not at all appropriate to the place but I just really liked them. It still seemed like whoever had decorated it had seen half a movie once about fancy people and used that as their sole guide, but I liked the phone and the can and the flour box a lot anyway.

Who I Ate With/Things We Talked About: JT; her recent trip to NYC, sleeping on long flights, eyemasks, the recent reading of my play, roller skating

What Sort of Ghost I’d Expect to Find if I Believed in Ghosts Which I do Not: A disco-dancing couple who liked to stop by Foxy’s for a light supper before a night out on the town. 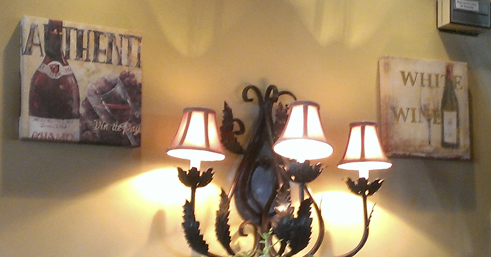