Had a dentist appointment, so to cheer myself up after I went to one of my favorite places on earth, the Original Farmer’s Market in Hollywood. This isn’t the regular sort of farmer’s market where people set up tables one day a week, but a permanent structure (actually several structures sort of hunkered together with open areas in between them, but inside it feels like you’re in one structure with an odd roof that doesn’t cover everything, and also sort of like you’re still outside) that has been here since 1935. Inside is a jumble of food stands and stalls and little stores selling tourist tchotchkes, hats, hot pepper sauce, toys, stickers, scented candles, candy, ice cream, and of course fresh fruits and vegetables. There are dozens of places to eat and every where are round tables with different-colored tops and folding chairs and it’s always packed full of people and it’s just marvelous. It’s mentioned in the book Weetzie Bat by L.A. siren Francesca Lia Block, which I read before I moved here (and was one of the reasons I did), and I was thrilled to find it right across the street from my first Hollywood apartment. It is, to me, the very best thing in Los Angeles.

There are several places in the Farmer’s Market on The List so I chose the oldest; Magee’s Kitchen. I’d never eaten there before (my usual is jambalaya at The Gumbo Pot) but have heard many people say it’s their favorite.

-a long counter with all the food under glass, a long line of cold salads in bowls sitting in ice, then hot sides like beans and corn and veggies in trays–all looking mouthwatering–and then a carving station with large hunks of meat. Signs advertising their offerings hang from a green striped awning overheard, the one mentioning their horseradish has a silhouette of a mule on it, and a nearby sign promises it has “a kick like a Missouri mule.” Behind the counter on the wall are photos of plates of food, and large menu placards. The signs all say that Magee’s has been around since 1917; I looked into it and learned hat they were at the Grand Central Market downtown before moving to the Farmer’s Market in ’34. 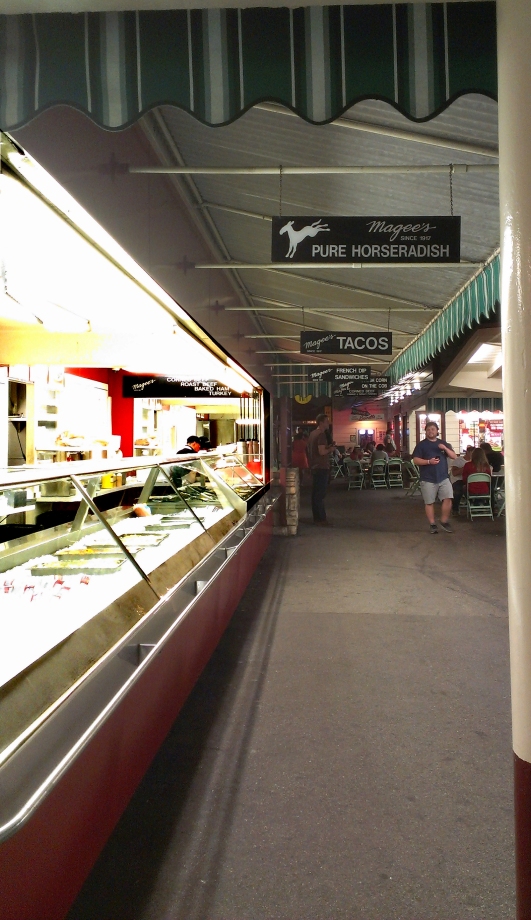 -I got a corned beef sandwich, having heard their corned beef was particularly good. I was going to get it on rye, then decided to ask the guy behind the counter what bread he thought was best, and he looked at me like I was crazy and gently assured me that yes, obviously, the rye. He suggested I have it with both mustard and horseradish and he was right, it was marvelous. All the sides looked delicious and I chose the zucchini, which was stewed in some way with tomatoes and is all I ever want to eat from now on.

-A woman near me was sitting reading, a large leopard-print stroller next to her. Inside the stroller, curled up, was a large gray and brown cat on a leash. I would love to know what the cat thought of this whole situation.

-Another guy nearby looked shockingly like Draco Malfoy from the Harry Potter movies. Same hair, same face. I wonder if this was a look he did on purpose? He wasn’t wearing wizarding robes or anything, and his friends looked normal. But it was an astounding resemblance.

-A young couple walked past, clearly tourists, clearly fed up with each other. As they went by, the woman said in a voice so exasperated it must have hurt her throat, “but that’s what I’m telling you! It’s not a lunch thing! It’s a dinner thing!”

-A lot of women seeme to be wearing headscarves, in a sort of modified turban style. Is that the new fashion? I’m glad I don’t keep up with such things because I’m really bad at tying scarves.

-I once read a book about the making of the Farmer’s Market, called The Second Carrot from the End by Fred Beck. For some reason the two things I most remember is that in their first radio ads, instead of talking to shoppers, they called out to farmers to bring their best produce to sell, and that once early on they caught a farmer selling produce he’d bought at a grocery store; they kicked him out and I think maybe beat him up too. What I really liked about the book was that they talked about creating the Farmer’s Market the way people often talking about making a play or movie–like it was a scrappy creative project they were excited about going in on and trying to make work.

-A guy walked by wearing a t-shirt with a Rorschach blot on it, only it wasn’t a real blot–it had been clearly fashioned to look like a skull. At least that’s what I thought, and then it occurred to me that maybe he thought it looked like a butterfly; how would I know?

-While I was eating the marvelous stewed zucchini, a drop of juice fell on my shirt. I JUST finally got the stain out of this shirt from the time I ate at Dinah’s. So unfair. Luckily I was carrying a purse with a strap that crosses in front, so I was able to maneuver the new stain under the strap, mostly, I think.

-A guy walked buy saying to his girlfriend, “the Brazillian is really easy. You just pick out what you want.” He was talking about a Brazillian restaurant, I realized eventually.

-There was an accordion player nearby, and the music floated through the sounds of the crowd. I absolutely love accordion music. After I was done I went over and wanted to put a dollar in his hat but there was no hat–he was just playing. So I smiled my best smile at him instead.

-You’re supposed to just leave your tray and plates and trash and stuff on the table when you’re done eating. You really are. I have triple and maybe quadruple checked this with the people who come around and clean the tables, and always get the same answer. It feels so wrong. But there isn’t any place to put the trays and plates and things near the trash cans. I always clean up my area as much as I can, but it still feels like I’m being horribly rude.

-Near Magee’s Kitchen was a place that had sugar-free ice cream, and I got some even though even sugar-free treats seem too sweet to me these days, and sat near the accordion player for a while longer. I wish I still lived close enough to the Farmer’s Market to go every day.

What I Ate: Corned beef on rye with horseradish and mustard, stewed zucchini with tomatoes.

What I Read While I Ate: I didn’t end up reading, just watched the people go by

What Sort of Ghost I’d Expect to Find if I Believed in Ghosts Which I do Not: A housewife who walked here every morning with a little rolling cart, to buy fruits and vegetables and to have a nice chat with her neighbors.