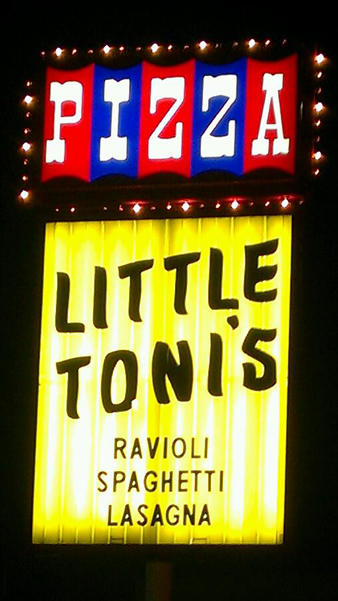 It was incredibly hard to get a picture of this sign to show up on my camera as anything other than a block of light. But I stuck with it.

Wasn’t planning on going to another place Friday night, but we went to a party at a bar and when we got there the kitchen was closed and I was hungry and Little Toni’s was just down the street, so David (my husband) and our friend Corey and I walked over. I had always assumed, for some reason, that it was a pizza-by-the-slice type place, with a counter and rickety tables. Turned out to be a sit-down restaurant, much nicer than you usually see open till 2 a.m.

-Getting there was confusingly difficult; it sits on a wedge-shaped corner where three streets cross at odd angles and none of the crosswalks seemed to lead there. We were finally forced to nervously jaywalk.

-David (my husband) and I decided to split a small pizza with mushrooms and tomatoes. Our friend Corey doesn’t like toppings on pizza but he wasn’t all that hungry anyway so we got some cheesy garlic bread to share.

-There was a large family sitting at the next table. At one point a young woman said loudly, “for the longest time my dentist was Dr. [Garbled]  and he just don’t care!” This made the whole family laugh. I was very curious to know what he doesn’t care about and why this is a cause for laughter rather than concern, but they did not explain loudly enough for me to hear.

See? Doesn’t this totally look like a scene from some Greek myth or other?

-The picture above our booth was one I knew but couldn’t place; it depicts a young couple running while holding a cloth over their heads and all David (my husband) and I could remember for sure was that depicts a scene from some Greek myth. I thought Tristan and Isolde, David (my husband) thought Apollo and Daphne, Corey guessed Euridice and Orpheus. It was driving me mad, I even texted an art expert coworker to see if she knew. Finally David (my husband) found it in Google images and we were all wrong; it had nothing to do with a Greek myth, just an anonymous beautiful couple from “The Storm” by Pierre Auguste Cot.

-A guy at the next table sang loudly, “say hello to my little friend” and we were hoping maybe he was writing Scarface the musical but then it seemed that he was just doing a bit he’d seen on TV and we were disappointed in him.

– We could have had the pizza (very yummy and fresh, crispy thin crust)  cut into four large slices, but we prefer smaller slices. It came on one of those stands with the candle underneath, which always pleases David (my husband). I’m more neutral on the issue myself.

What I Ate: pizza with mushrooms and tomatoes, cheesy garlic bread

Who I Ate With/Things We Talked About: “Community,” timing in Warner Bros. Cartoons, the way people doing closed captions for live TV sometimes just give up, the Neo-Futurists’ show “Too Much Light Makes the Baby Go Blind”

What Sort of Ghost I’d Expect to Find if I Believed in Ghosts Which I do Not: a young girl, a musical prodigy whose parents would bring her to Little Toni’s after every recital, even the ones that ended after 10 p.m. Note: Unless otherwise stated, all ghosts mentioned in this blog died peacefully of old age and then reverted to the age/place of their choosing.