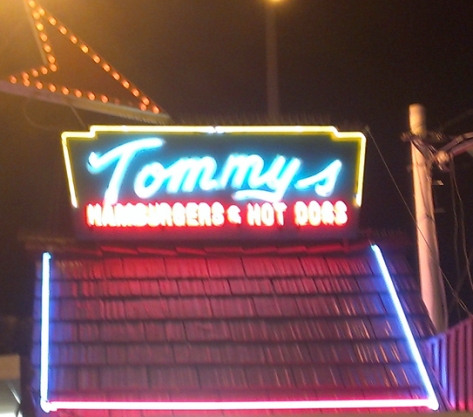 There are lots of Original Tommy’s Hamburgers stands around L.A., but this is the original one. I’ve never been to a Tommy’s, but David (my husband) is a fan so we stopped by late(ish) Saturday. The parking lot made a square, with two places to order and get food, one in the wall and one in the stand-alone shack near the street. The counter at the wall had a long line, with none at the shack, which was where I wanted to get the food anyway, so we walked over to find out why. The counter guy explained that they wouldn’t be opening for five or ten minutes. The line looked longer than that so we decided to wait. It was maybe three minutes, and by the time our food came there was a long line behind us. All the people made it feel like a party. Possibly because so many of them were at least a little drunk.
-Bare bones steel and formica, but somehow charming nonetheless. It smelled good, and the lights made it seem cozy next to the night. The roof on the shack is shingled like a little house. It’s sweet.
-While we stood waiting, cars were driving into the crowded parking lot (we’d parked on the street a couple blocks away to avoid the crush). Right behind David (my husband) there was suddenly a very loud noise and we all jumped a few feet in the air before realizing a gigantic SUV had backed into a pole–one of the short poles that I think are there to keep people from driving straight into the counter–and bits of tail-light and bumper were lying around. I felt bad for the guy, but honestly, don’t drive a vehicle the size of a short bus into a tiny crowded parking lot, you know?
-I tried to ask the guy behind the counter what I should order but he was having none of it. I got a chili cheeseburger with tomato and pickles and onions. I’m pretty sure I’ve never had a chili burger in my life before. I very much enjoyed it. I was glad for the tomatoes and pickles–something I’ve only started eating on sandwiches recently–because it was all so dense the juiciness was a relief.
-We ate standing at counters that lined the outside wall, with a lot of other people doing the same thing. There’s always something magical to me about being outside at night, especially with lots of other people around. I can’t quite explain it, I think it might remind me of Halloween when I was a kid. That feeling that you’re somewhere late and it’s dark and it could be dangerous, but it’s not because there’s all these other people there. Even though as an adult I’m often out at night in places that aren’t crowded and it’s not dangerous, and this place wouldn’t have felt dangerous if there hadn’t been a crowd… I don’t know how to say it right. I just love being in crowded places outside at night time. It makes me feel happy and safe and more alive than usual.
-I was ready to get a stomach ache from the food but I did not. So that’s nice.

What I Ate: Chili Cheeseburger with tomato, pickles, and onion
Who I Ate With/Things We Talked About: David (my husband); “The Big Con” by David Maurer; the movie “Paper Moon,” Ryan and Tatum O’Neil’s relationship (based on my iffy memories of Tatum’s memoir).
What Sort of Ghost I’d Expect to Find if I Believed in Ghosts Which I do Not: Just a guy, a guy who likes hamburgers. He’s probably leaning against the wall, and he’s probably wearing a hat.