I had a babysitting job in Beverly Hills, so I went to the (fairly) nearby Factor’s Famous Deli for lunch beforehand.

-When you walk through the doors there’s a large takeaway counter and store, you walk through to get to the restaurant. Two large, airy rooms with green leather booths and light wood, a long-stemmed rose on each table (yellow with orange/red tips, my favorite), sports memorabilia and old movie posters cover the walls, a counter with stools in the very back. The two rooms are divided by a wall with large windows cut out of it, and inside each window a plant holder is suspended by wires so it looks like it’s floating in air.

-I was a bit overwhelmed by the menu and considered getting something other than a pastrami sandwich but I love pastrami sandwiches so much I almost always get them at delis. This one was great, thick marvelous pieces of pastrami cooked exactly right. I also got something called a toasted horn, because a page in the menu was devoted to taking about how the Horn is a traditional Jewish roll that is seldom seen anymore and it sounded really good. It was beyond good, something in between a bagel and maybe French bread? I ate it with cream cheese and then with pieces of pastrami that had fallen off the sandwich. I got fruit on the side, and it was ok.

-The man at the booth next to mine had a disturbingly high voice and very strong feelings about margarine vs. butter. “There’s just no sense in getting something that tastes bad! It messes your breakfast up!”

-The signs on the men and women’s rooms are pictures of people crossing their legs and clutching their groins. Underneath they say “gents” and “ladies. ” I think you need to choose between bathroom humor and saying “gents.” 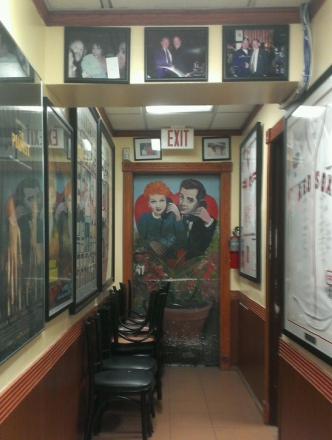 -It seems like two people with very different interests decorated the place together, in a race. There will be a couple old movie posters, then a framed team jersey, then a picture of a basketball player, then some John Wayne pictures plus a gun he used in some movie, then an autographed picture of a baseball player, then another movie poster. I guess this way there’s something for everyone.

-Before it left the kitchen some coleslaw got onto one side of my fruit cup. I was kind of grossed out–I’m allergic to mayo but beyond that I just find it icky–but upon investigation I found it had only touched a few spots and so was quite easy to remove.

-Sitting near me was an absolutely stunning couple I almost recognized; I’m pretty sure they were big celebrities but I couldn’t for the life of me figure out who. I tried to eavesdrop, in the hopes they’d mention their names or the last movie they’d starred in or something, but they were just a little too far away.

-I got my food really fast, and the waitress refilled my water a couple times while I was eating, but when I wanted the check she had completely disappeared. The area had mostly emptied out and I felt a bit deserted. It seemed like it would have been the easiest thing in the world to just get up and wander out. I’ve never done that; even when I was a troublemaking punk rock teenager I never ran out on a check, and I didn’t really consider it now. But I bet it would have been super easy. 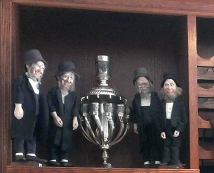 -Near the bathrooms was a room that didn’t have anyone seated in it, and on the wall was a shelf, and on that shelf were a bunch of old man dolls, and things that looked a little like Menorahs but weren’t. I would have loved to know what it was about, but there wasn’t anyone nearby to ask.

-I took half the toasted horn home to David (my husband), who happily talked about getting them there as a small child.

What I Ate: Pastrami on rye, fruit, half a toasted horn with cream cheese, a couple bites of pickle.

What I Read While I Ate: “Audrey Wait!” by  Robin Benway, a fun YA book I picked up on a whim at the library (this happens a LOT when you work at a library).

What Sort of Ghost I’d Expect to Find if I Believed in Ghosts Which I do Not: Two little old ladies, who started meeting here every week when their children were small, and were still meeting every week to compare pictures of their grandchildren