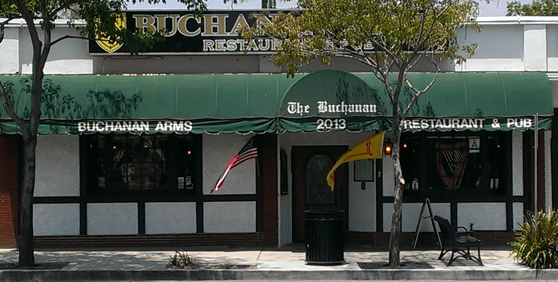 Walked to the  Buchanan Arms Restaurant  & Pub for lunch. I love London more than anyplace in the world (I keep hoping a mysterious benefactor will decide I really should do this blog there) and going to “British” pubs always makes me a funny combination of happy and wistful. Cause it’s almost like I’m in England, but of course I’m not. Luckily where I am is L.A., and that’s good too.
-light wood tables, pushed together for friendliness, booths with red leather seats, walls covered with: ads for Watneys (some kind of alcohol company) and plaid bunting and portraits of the queen and Churchill and old maps of England. Over the bar is the Scottish flag and a flag with the Buchanan crest and a US flag. Also a flag with an LA sports team, looking totally out of place but easily ignorable. It smells exactly like all the British food you like best.
-I got roast beef and mashed potatoes and peas and Yorkshire pudding. The lunch version, which doesn’t include soup and salad but costs, amazingly, less than nine dollars. It all tasted wonderful.
-I was a little disappointed that the guy who seems to run the place doesnt have an English accent, but then I realize that “family operated since 1977” means that of course the children of the people who started it grew up in the states.
-The waitress asked if I wanted horseradish and when I said yes she wanted to know if I wanted it blended with sour cream or “full strength.” When I assured her I wanted the strong stuff she smiled skeptically. She doesn’t know that I have attended many Seders and can hold my horseradish.
-Yorkshire pudding is the best food in the world. It’s not really pudding, it’s not sweet at all, it’s bread, kind of like a roll or biscuit but fluffy and kind of hollow inside. Shaped like a muffin but couldn’t be less muffin-like. You dip it in the gravy (which is thin, close to au jus) and I know of nothing more delicious.
-Three people came in and took a table near me and ordered three sticky puddings. The british have the best names for sweets imaginable. One of them explains to the other two that in England “pudding” doesn’t necessarily mean what it does here, but is just a term for really any dessert. That used to confuse me a lot in old children’s books from England, where you’d get lines like “there was chocolate cake for pudding,” or “pudding was just nuts and berries.” The guy didn’t go into the whole Yorkshire pudding issue, and I don’t blame him.
-in the bathroom is a flyer for a band, at the top is a cartoon person saying “this band is fabulous” only I guess the top of the text got cut off in the printing so it looked like “bana” not “band.” Someone wrote on it and changed it to “this banana is fabulous.” Someone came up with that joke, and then went to the trouble of getting a pen and writing it up there. I mean, maybe a pen wasn’t so hard to find, but it’s doubtful they already had one in their hand. They had to at least reach into their purse to make their idea a reality.
-a woman at a table near me, who was also eating alone, spent a while awkwardly explaining to the waitress that she was leaving her doggy bag on the table while she went to the ladies’, but she wasn’t leaving it behind, she was coming back for it, so they shouldn’t think she was gone and throw it out or anything… I’m so glad I’m not the only one who worries about that sort of thing. I always leave a ton of stuff on the table-a book, my jacket, etc-when I go to the restroom, for fear they’ll think I changed my mind about eating.

-over by the side of the bar there is a dart board. I’ve always thought it might be fun to get into darts, but they’re so sharp. I’d worry that I’d stab someone, or myself. I don’t even like it when people throw balls near me, and those don’t have sharp points.
-attached to the pub is a little shop selling British food and tchotchkes, and oh my goodness they have Yorkshire pudding mix! I was worried because the box says to use a Yorkshire pudding tin and I though that might be like a muffin pan but I didn’t know. I doubted the American teenager at the register knew either, but there was a woman with a British accent buying stuff so when she was finishing up I asked and she assured me that it’ll work fine as long as the pan is the deep kind. So happy I might eat Yorkshire pudding every day.
What I Ate: Roast beef, mashed potatoes, peas, Yorkshire pudding, lots of horseradish.
What I Read: “The Pirates! In an Adventure with Communists!” by Gideon Defoe. I can not possibly recommend the Pirates books highly enough. The series starts with “The Pirates! In an Adventure with Scientists!” and the series includes adventures with Whalers, Napoleon, Romanticists, and I might be forgetting one or two. They are hilarious and smart and weird and few things make me as happy.
What Sort of Ghost I’d Expect to Find if I Believed in Ghosts Which I Do Not: A guy who loved football like crazy, back when you couldn’t get Americans to even believe that everywhere else in the world football meant soccer.